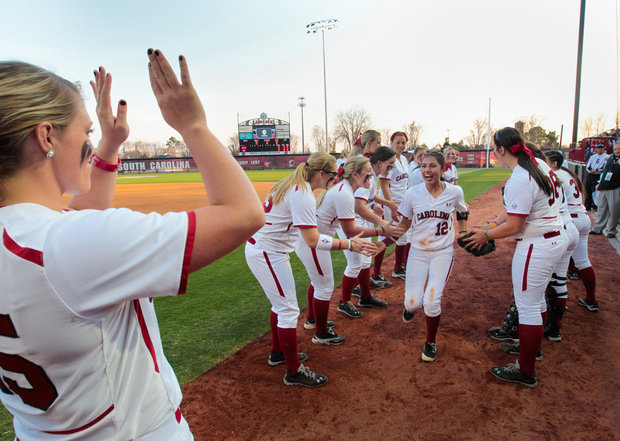 By NEIL WHITE — nwhite@thestate.com All that was missing at the new Carolina Softball Stadium at Beckham Field on Friday night was a storybook finish. The Gamecocks had the potential winning run at the plate in the final inning of a 6-4 loss to Alabama, the defending national champions, but they couldn’t make the debut of the $8 million ballpark a perfect one. Just don’t tell that to USC softball coach Beverly Smith. She still felt like a winner.

“To me, it was a great day for South Carolina softball,” Smith said. “I say that because this facility is going to be here for decades. I’m so excited this team had the opportunity to open the stadium because it’s going to mean so much for the program moving forward.”

She watched her team play in front of a sellout crowd — attendance was capped at 830 because of ongoing construction — as it entered the seventh inning tied before a rally by the Crimson Tide. That’s the type of energy she envisioned in Columbia when she took the job three years ago.

“The girls sensed that. We keep talking about a culture of excellence and the standards we set for ourselves,” Smith said. “A facility like this gives us an opportunity to go out and recruit at an extremely high level. Athletes want to play in the SEC, and they want to play in a packed stadium against the defending national champions.”

The stadium, which has 1,277 garnet chairback seats and a standing-room-only capacity of 1,480, has the same look and feel of the five-year-old baseball stadium. There’s a home clubhouse, two suites, a full press box, and a concourse at the top of the seating area that allows the fans to watch the game from anywhere in the stadium.

Another attractive feature is a pedestrian bridge that runs from the new Rice Center in the Athletics Village to the entrance of the stadium.

Alabama coach Patrick Murphy, who has taken his team to eight Women’s College World Series appearances, came away impressed with the stadium as well as relieved that his fourth-ranked Crimson Tide (24-3) survived for the win.

“It’s really cool to see a school put their resources behind the sport of softball,” Murphy said. “We’ve sold over 2,700 season tickets to softball, and they can do the same thing here. They’re going to get better and better. This is Bev’s best team that we’ve faced. The potential is here, the support is here now, and the facility is going to be awesome.”

Not everything is brand new. The playing surface was redone last season, and the same scoreboard and video board remain beyond the right-center field fence. The players loved how it all came together, especially after the Gamecocks (16-7) had to play their first 22 games of the season on the road.

“It was an amazing feeling,” said senior pitcher Audrey Broyles, who threw the new ballpark’s first pitch. “It’s really hard to describe. We walked in and it feels like home. It’s the field we’re used to playing on, but we have this beautiful stadium behind us full of wonderful fans ready to cheer us on. And facing the defending champs just added to all the emotion.”

“It’s just an honor to be the first ones to get to play in this stadium,” Garcia said. “I was just so happy I was the first one to get it done.”

Mitzi and David Beckham drew the honor of throwing out the first pitch. The field retains their name because of the couple’s long-standing support of the program. They provided the $250,000 donation in 1997 that paid for a number of improvements to the former facility, including the field’s lights.

“It’s a dream come true for us to see the program get to this place. I’m glad I lived long enough to see this,” said David Beckham, 76, a retired anesthesiologist. “We are big supporters of women’s athletics and female athletes. This really, really makes us feel good for the girls. We’ve known the girls and the families as they’ve come along almost like they’re our own.”

Joyce Compton, who won 951 games as USC’s coach from 1987-2010 while taking the Gamecocks to 13 NCAA tournaments and two Women’s College World Series appearances, took in the game from the stands. She was thrilled by what she saw, even if she didn’t reap the benefits of a new facility.

“It’s here and that’s the important thing,” Compton said. “These kids get to play in it, and it’s going to do nothing but help recruiting. That’s the lifeblood of any program. This could easily be the best stadium in the conference. Once this gets finished, it’s going to be jaw-dropping.”

And Smith loved the way her team competed to the final out. She can feel the momentum gathering, and so can her players.

“We’re just getting started,” Broyles said. “There’s nothing stopping us.”