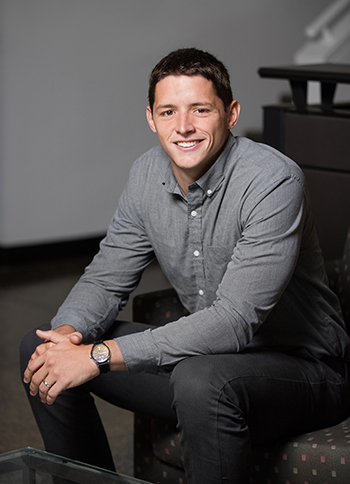 A recent graduate of the Clemson University Master of Architecture program, Hutchinson previously worked with Quackenbush in 2015 as a summer intern on several projects, including a feasibility study for the University of South Carolina Football Operations Building.

In his new position at Q+, Hutchinson will again join the team working on the Football Operations project, which is now being designed.

The more than 100,000-square-foot facility will house football offices, meeting rooms, a weight room, training room, and a locker and equipment room. Physical therapy and nutrition areas will allow players to prepare physically and mentally.

“These facilities will allow student athletes to perform at the highest level,” says Hutchinson, who also holds a Bachelor of Arts in Architecture from Clemson University.

Prior to returning to grad school, Hutchinson worked with Columbia firm Watson Tate Savory on the University of South Carolina’s Indoor Football Practice Facility, which sits adjacent to the future site of the Football Operations Building.

While completing his master’s, Hutchinson assisted teaching in the undergraduate program. “Architectural education is a really valuable way of learning how to think, be creative and solve problems,” he says.

A native of Columbia, Hutchinson finds working with such a well-respected firm in his hometown an opportunity he would not be able to find anywhere else.

“It’s rewarding for me to be part of this city’s growth,” he says, “and to know I’m contributing to making the city I grew up in a better place to live.”

“Spencer’s commitment reflects the kind of enthusiasm and innovative spirit that complements our team,” President Doug Quackenbush says. “His knowledge of Columbia as a long-time member of the community is particularly valuable as we grow our practice.”